Here’s a compilation of some of the best and lamest Korean dad jokes we’ve seen around the internet, with their explanation. Of course, it will be better if you can understand them right away.

Q: What did the cookie say to his friends when he was ready to go?
A: 과자! (gwaja)

You can say “let’s go” when it is time to leave, which is also 가자 (gaja) in Korean. The phrase 과자 (gwaja) which means snacks or cookies in Korean sounds like가자 (gaja). So when a bossy cookie is ready to go, he’ll say to his other cookie friends 과자 (gwaja).

You will say 못 가 (mot ga) when you can’t go to a certain place. And the phrase 못 가 (motga) sounds alike with 모카 (moka) which is one of everyone’s favourite type of coffee.

Q: What is a robot’s favourite food?
A: 비빔밥! (bibimbap)

What’s that “beep, beep” noise? Sounds like a robot, doesn’t it? And the syllables 비빔 (bibim) in 비빔밥 (bibimbap) sound like “beep, beep” when pronounced quickly. 밥 (bap), on the other hand, means rice. So, the favorite food of those hungry robots is 비빔밥 (bibimbap).

Q: Why did the pear go to the hospital?
A: 배아파서 (baeapaseo)

The word 배 (bae) can mean two things in Korean. It can mean pear and stomach. And, 아파 (apa) from the word 아프다 (apeuda) means pain or ache. So, if a pear goes to the hospital it is because of stomach ache which can be expressed as 배아파서 (baeapaseo).

By definition, 이불 (ibul) means blanket but if you take out each of the syllables individually, we’ll have 이 (i) and 불 (bul). 이 (i) means 2 and 불 (bul) means dollar, but an informal word. So a Korean blanket costs 이불 (ibul) or $2.

Q: What is the biggest bean in the world?
A: 킹콩! (kingkong)

The word 콩 (kong) in Korean means “bean“ and 킹 (king) sounds like “king“. Put them together, and you’ve got the big bean boss, King Kong!

Q: What does a vampire drink in the morning?
A: 코피! (kopi)

We all know that vampires usually drink blood, right? The word for “blood” in Korean is 피 (pi) and 코 (ko) means “nose“. Put them together and you’ve got 커피 (kopi, which sounds like “coffee”).

Q: Why couldn’t the ice cream cones cross the road?
A: 차가와서! (chagawaseo)

If you’re going to eat ice cream, it’s got to be cold. In Korean cold is 차갑다 (chagapda). Now, what passes through roads are cars, right? The Korean word for cars is 차 (cha) and 와서 (waseo) means “because something came“. This makes 차가와서 (chagawaseo) means the car came. So, ice cream cones cannot cross the road because cars came.

The word 귀 (gwi) means ears and the word 없다 (eopda) means none or not existing. So, the word 귀없다 (gwieopda) means no ears. When it’s pronounced quickly, it sounds like the Korean word for cute, which is 귀엽다 (gwiyeopda)

In the native Korean number system, number 4 is read as 넷 (net). But the ㅅ in 넷 (net) is usually omitted when combined with nouns. Meanwhile, arms is expressed as 팔 (pal). So, 네팔 (nepal) which is a country name literally means 4 arms in Korea.

Q: What do you call a news reporter who interviews the sun?
A: 해리포터 (haeripoteo)

해 (hae) means sun in Korean while 리포터 (ripoteo) is how the English word reporter is spelled in Korean. So a reporter who interviews the sun is a 해리포터 (haeripoteo), which sounds like Harry Potter.

Do these jokes make you laugh or roll your eyes? Hope you had fun and learnt some vocabs along the way. Till then! 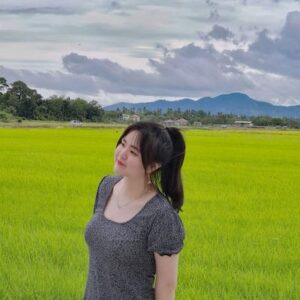 As someone who started learning Korean language since the age of 11, surprisingly, Chloe's not too keen on K-dramas. However, she loves K-culture, history and food - and writing about them.