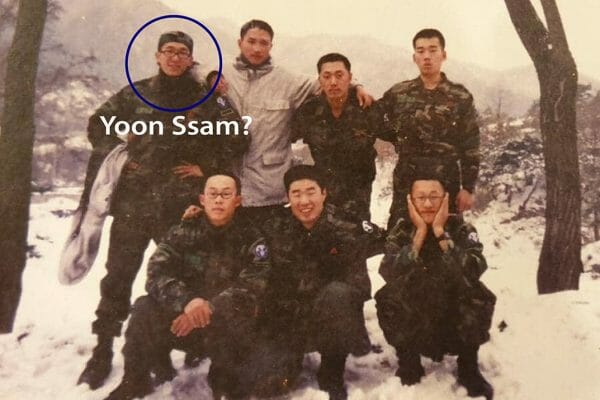 One of the first things you’re supposed to do is shave your head.

This may come as a surprise to some people but this is done in almost all military bases across the globe.

Some people would come to the camp with a ready shaven head.

For those who haven’t shaved their head yet, the base will offer a quick military style cut.

Interestingly, the hair is collected in a brown bag so that it can be sent to their respective families should they face an unexpected death while on duty and have no corporal remains.

A little morbid but it’s definitely a necessary precaution, just in case.

Photos of the new soldiers are also taken and sent to their family.

Just like the hair, the picture is used for funerary needs.

In South Korea, it’s customary to have a picture of the deceased during the funeral where people can bow and show their respect for the person who’s passed away.

When the new recruits join active duty, all their personal items including the picture and the hair is sent to their homes for their family to keep safe.

Receiving the packaging tends to be an emotional event for the family as it symbolised the transition of their sons from childhood to manhood.

3) Work round the clock

Generally, the military bases are located in remote and/or rural areas.

As you enter the base, for the first 5 weeks you’ll undergo basic military training.

Despite being called basic, it is by no means easy for normal civilians.

They also give you special speech training.

Speaking during your military service will need some time since most of the speech has to end with 다, 나, or 까.

Military songs are also thought as a means to keep your spirit high during training.

One of the famous songs is modjin sana-ee (멋진 사나이), which means “A cool man”.

Undoubtedly one of the most intense trainings we had was the gas chamber training where we are locked in the room filled with chemical gas to test our endurance.

Before you ask, let me confirm that the chemical gas, despite being painful at the moment, is absolutely harmless and doesn’t impact your health.

During this training, you are brought to a gas chamber with several other recruits and trainers.

In the beginning, you won’t be feeling anything since you’ll be wearing a face mask but after some time, your trainers will ask you to remove the mask.

That’s when the real task starts. The pungent gas stings your body in ways you can’t imagine.

By the time the training is done, you’ll emerge out covered in drool, snot and sweat.

Not exactly one of your shining moments.

The military base has many trainers to shape the new recruits.

The infamous ones are the red hat and black hat trainers.

Since they have seniority in the military, you are required to follow all their orders, no questions asked.

Between the two, the black cap trainers are the highest ranking officers.

Due to the respect and control these trainers have many recruits try to get their hands on the red hat and black hat positions.

We often hear about how the soldiers in many other countries are sent to war zones to fight and defend.

This isn’t usually the case in South Korea.

Unlike the US military that sends its soldiers to places like Iran and Afghanistan, the South Korean military chooses to train its army inland.

It’s because South Korea itself is a military war zone and it prefers to have its regime ready for battle in case of an attack.

The military service in South Korea has 2 divisions; active duty and public service.

Normally serving on active duty is considered more respectable than serving as a civil servant because it’s seen as taking the easy way out.

The bias is very evident in the way the two servicemen are treated.

If you’ve served in active duty for at least a 100 days, you’d be entitled to your first time off.

The first holiday is usually for about 4 days in which time most people would go home to visit the loved ones.

The holidays are also granted as a reward.

For every promotion that you get, you’ll receive 10 extra days of time off!

You’ll also get time off for major holidays like Chuseok (추석) also known as Autumn Eve.

Collective punishments are a big deal in the military service.

One mistake made by a recruit results in everyone getting punished.

I know it sounds a little unfair but the whole purpose of this punishment is to encourage people to look out for one another.

They also learn and grow closer in the process.

This might be something that catches you off guard but bullying happens quite frequently during the military service.

Usually, it’s in the form of harmless fun but sometimes it turns ugly quite quickly.

One such case is of Lim who was part of the military service in 2015.

You can read more about the story here.

However, the government claims that there are serious actions they have taken to curb bullying from happening in the military bases.

Exempted from service in South Korea?

Even though the military service is a compulsory duty for Korean men, there are some exceptions to it.

For example, athletes who win any medals in the Olympic Games or win gold medals in the Asian Games are granted an exemption from military service.

However, this does not apply to E-sport athletes.

Surprisingly, K-pop artists, actors or directors are not exempted from their duties.

Explains why your favourite oppa and hyeong need to be off to serve their country.

All Korean citizens who are listed to join the military service, are required to take a medical exam before reporting for duty.

You can find more details about the exam results and the posting that it qualifies to here.

If you’re interested in knowing what are the physical exams that the listed Korean citizens need to go through?

Check them out here.

Naturally, there are many cases where people intentionally fail their physical exams so that they can be exempted as well.

However, this action can result in being penalised and serving jail time if you’re found to be guilty.

A couple of years ago a young man was accused of binging on fried chicken so that he can avoid being enlisted for the military service but after much enquiry, he was found not guilty!

So with reasonable excuse, you can be exempted from reporting for military service.

Read more about the story here!

Regardless of the fact that South Korean military service has its ups and downs, its citizens are still proud to serve their country.

Many people including me would say that even though it was a difficult duty to perform the experiences and knowledge that we got from there lasts a lifetime.