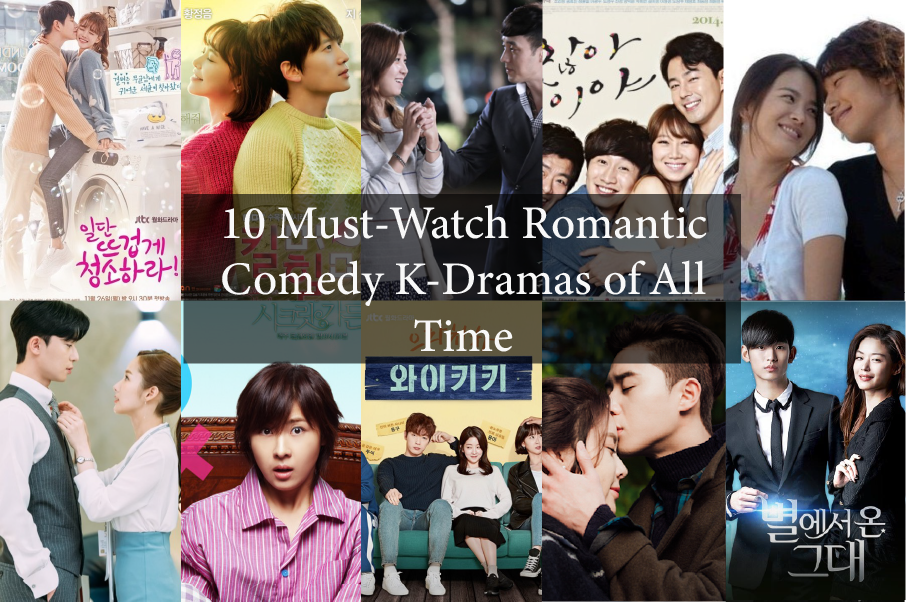 Romantic comedy K-Dramas are the best to watch, especially when you need some laughter to lighten up your mood after a hectic day.

If I would to list down all the K-Dramas that are worth binge-watching, then this list wouldn’t end. So, I’ve picked out 10 must-watch Romantic Comedy K-Dramas of all time (in no particular order).

If you happen to run out of K-Dramas to watch, then this list is for you. Who knows, you might’ve missed some of these dramas!

Not a fan of romantic K-Dramas? Check out: Top 10 Time Travel Korean Dramas You Have To Watch

“Kill Me Heal Me” is a another unforgettable K-drama featuring dissociative identity disorder in a well-executed plot.

The series revolves around Cha Do Hyun (Ji Sung) who has dissociative identity disorder. He then meets a psychiatric, Oh Ri Jin (Hwang Jung Eum) who helps him regain control over his life.

There’s no denying that Ji Sung is one of the most talented actors out there for being able to pull off acting out the seven personalities he had in the series. And every single one of them is fun and entertaining to
watch, especially the sassy Yo Na!

Also, Park Seo Joon’s character as Oh Ri On is a plus point, with his brilliant acting—it only made the whole series more amusing.

Full House” is one of the most popular classics of rom-com K-Drama, starring well-known actor, Rain and actress, Song Hye Kyo.

When pompous movie star Lee Young Jae (Rain) moves into Full House, he met Han Ji Eun (Song Hye Kyo), the original owner of house who has
been kicked out after her friends deceived her by selling off her house.

Apart from the common ‘marriage contract’ theme, this series will get you laughing out loud to the hilarious antics Lee Young Jae and Han Ji Eun put each other through after ending up living together.

This series is PURE comedy, filled with wacky humour and a touch of romance that will crack you up.

Their fates change after finding a baby abandoned at their guesthouse, which leads to more chaos, new tenants and more challenges to face in what was once known as a quiet guesthouse.

If you’re planning to watch this drama, brace yourself for lots of non-stop laughter!

She Was Pretty is an uplifting rom-com featuring amusing characters with a classic female lead makeover theme.

But he was unable to recognise her because she wasn’t as beautiful as she used to be when she was younger, so Hye Jin made her best friend meet him in her place instead.

What makes the drama a whole lot more fun to watch is the portrayal of Choi Si Won’s character as Kim Shin Hyuk. Besides his good looks, he’ll have your heart aching with second male lead syndrome with his dramatic expressions and constant emotional change.

It’s not often that you can find humour in a horror series, but somehow the Hong Sisters were able to pull it off.

Being constantly pestered by ghosts, Tae Gong Sil (Gong Hyo Jin) became miserable as she barely gets enough sleep. She then meets Joo Joong Won (So Ji Sub) who is an arrogant CEO of a shopping mall and clings to him upon finding out that she can find peace with his company.

What makes this drama a whole lot more interesting is that it’s not just about scary ghosts going after Gong Sil, but how the ghost characters are able to bring more sentimental meaning to the series with its own backstory.

Also, we got to appreciate how the casts made this series a whole lot more fun to watch with their brilliant acting skills!

We had good-looking Goblins and grim reapers dominate K-Dramas before, but an alien has got to be the most iconic one by far!

With Jun Ji Hyun’s over-the-top acting and dramatic gestures (especially her unforgettable ‘sorry‘) along with Kim Soo Hyun’s icy character, it’s no wonder the series became a huge success not only in Korea but also internationally!

Besides entertaining characters, the story is also one of a kind – how often do you get to watch a series about an alien (an attractive one at that) Do Min Joon (Kim Soo Hyun) falling in love with a famous actress Chun Song Yi (Jun Ji Hyun)?

This sweet and cute series will make your heart flutter, and possibly fulfil
your office romance fantasy.

Lee Young Joon (Park Seo Joon) has always been a narcissistic and arrogant CEO, but he later realises that he has feelings for his secretary, Kim Mi So (Park Min Young) when she suddenly decides to quit.

Much like any other rom-coms, “What’s Wrong with Secretary Kim” might melt your heart or make you cringe with some cliché and sweet scenes, but you’ll be able to look past that because of the on-screen chemistry shared between both leads.

Their connection is so natural and real that they were even mistaken as a couple in real life. Plus, the fact that Park Min Young’s beauty really complements Park Seo Joon’s charm makes them the perfect on-screen couple.

And if you’re wondering what the best part of this series is… every character gets their happy ending!

“It’s Okay, That’s Love” is one of the most underrated series, featuring a complicated love story between a writer, Jang Jae Yeol (Jo In Sung) and a psychiatrist, Ji Hae Soo (Gong Hyo Jin) who both suffer from mental illness rooted in trauma from their pasts.

Besides the amazing casts, the non-cliché plot is another reason why you should totally watch this series!

It portrays the issues of mental illness and romance that many people can relate to today with a balance of humour, warmth and seriousness.

Also, unlike most rom-coms with a typical romance plot, this series is actually very realistic in portraying the main character’ journey towards dealing with love and acceptance as they gradually heals from their traumatic pasts.

“Clean With Passion For Now” is a fluffy rom-com series about an introverted CEO of a cleaning company, Sun Gyeol (Yoon Gyun Sang) who suffers from a severe case of Mysophobia. He feared of physical contact with anyone and avoided people, until a sloppy girl, Gil O Sol (Kim Yoo Jung) entered and changed his life.

This series may have used the ‘poor girl rich boy’ trope, but the writers managed to pull off in creating an interesting twist to the storyline by involving the cleaning industry alongside comical scenes.

Plus, Yoon Gyun Sang’s role was a pleasant surprise – from his facial expressions to his gestures, he was believable in his character. Unexpectedly, he’s also the source of amusement throughout the drama, while Kim Yoo Jung never fails to lighten up the series with her bright smile.

The plot may be basic, but overall this series is guaranteed to inspire and heal!

Ah, another iconic romantic comedy K-drama. This series became so popular that even legendary K-Pop boy band BIGBANG did an unforgettable parody about it!

The series might seem clichéd at first, but it will take you on a roller coaster ride of emotions with a twist of fantasy, offering hilarity with a gender role reversal theme.

Let us know which drama is your favourite or which drama are you interested to watch from the list! Also, if you have any recommendations, feel free to let us know in the comments!

Kick start your Korean language learning journey and watch all of your favorite Korean dramas without subtitles!