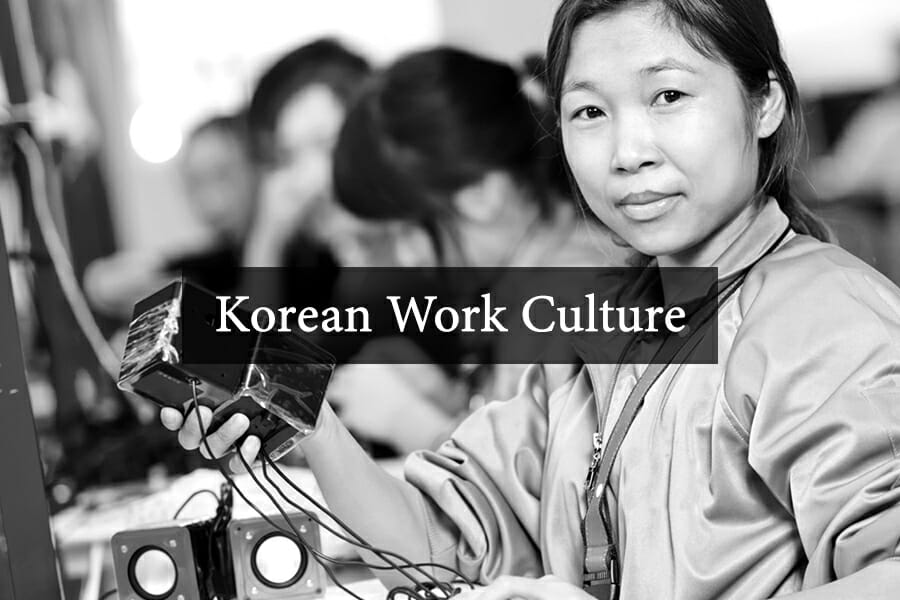 Sadly, here comes the twist. There is an unwritten rule, where you will be required to work overtime without getting paid almost every day. You are also not allowed to leave the office before your boss does.

This means Koreans work far longer hours (10-12 hours a day) than what is stated in their working contracts. This type of work culture is a part of the more traditional companies like 삼성 Samsung.

Nevertheless, there is some good news! The Korean government has been enforcing laws to shorten the work hours per week.

The new law that has already gone into effect cuts the maximum workweek to 68hours to 52 hours a week for companies with 300 employees or more, This equals 12 hours of overtime.

You might have noticed by now that the Korean culture has a hierarchical structure and the Korean work culture is no different. In the Korean workplace, the higher you are, the better you will be treated.

So, if you are a newbie at work, things might be a little tough for you – especially since you’ll continue to be the newbie until another new person is hired onto the team.

You will not be allowed to say “no” those with seniority over you and sometimes your seniors will even be rude to you on purpose just because you are new on the team. Your opinions will not also be taken seriously in team meetings.

However, Korean companies do appreciate close-knit groups and a united company environment.

The Membership Training event, either for just the team or the whole company are carried out every year.

At this event, the team will go on a one night trip to the countryside together.

Besides, in order to keep the team environment as close as a family, the company will often go out for happy hour drinking known as 회식 “Hoesik”.

If you don’t drink or don’t want to drink much alcohol, check out our blog on Genius “excuses” Korean drinkers use to avoid being forced into drinking too much alcohol.

In the Western world, work-life balance is given importance. Personal and family time is a priority. Personal life and professional life are both kept separately.

However, it does not work this way in South Korea. Their number one priority should be work and family comes second.

However, they still get to attend the after-work drinking parties with their co-workers and boss. These happen about once or twice a week.

Generally, Korean society works on the age hierarchy. The older you are, the more respect and money you will make. This even applies to the working culture. Your age matters more than your skill.

If you are younger, you are considered the lowest in the pecking order and everyone usually follows the oldest person, who is the top dog. This is exactly what hinders productivity.

The Korean corporate culture, in particular, follows dictates of Confucianism, which leads to bosses calling employees by their first name but employees always referring to their bosses by title and last name.

In the Western world, if a problem arises in the workplace, a subordinate can decide on the best way to handle and resolve the issue. Superiors are only consulted when it is really needed.

However, this is not the case in South Korea. You will need to follow the decision-making stages according to the hierarchy. These stages are usually followed by plenty of meetings and documentation. Therefore, the decision-making process is slower and in many cases inefficient.

In the Western world, the focus is given to individual effort more than the group effort. An individual’s skills and contributions are considered very important to company success.

In South Korea, the contributions of the entire group are more important. The individual contribution will only be recognized if the effort has led up to the success of the group as a whole.

South Koreans tend to use words like we, us, our instead of I, me, etc.

In the Western work culture, it is believed that every individual can be successful and prosper financially through hard work. Therefore, time is considered very important. What this means is that employees expect to get paid equally for the time they put in. Having their time wasted is as equally as bad as wasting money.

On the contrary, there is no such thing in the Korean work culture. In Korea, employees are expected to work overtime without getting paid for the extra hours.

Another example is the ESL teachers. They are expected to commute back and forth for about an hour for a business class. However, they do not receive any compensation for the commute time. They only get paid for teaching.

Most Korean employees are already “normal” to this and do not complain. However, many Westerners that work in Korea are not happy with this practice.

Have you experienced the Korean working culture before? Comment your experience down below!