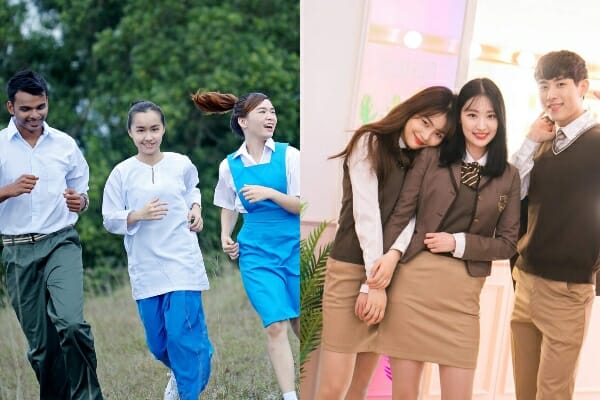 The differences between Korean schools and Malaysian schools

The place that is either dreaded or loved. There is no in between. You either like it or you don’t and apparently it’s the same worldwide.

School is the place where bittersweet memories are made, both good and bad. From having crushes, dating, skipping classes, getting detention with friends, being backstabbed by snakes and eventually finding your true friends, everyone can agree that the years where they probably made the stupidest choices are usually back when they were in school.

Stupid choices, but definitely great memories to hold on to!

Although these factors can be relatable for almost every student worldwide, there can be differences in each school in different countries! For example, let’s take the general differences between Korean and Malaysian schools.

First up on our list of differences is school uniforms! I don’t know if you guys noticed but every school in Korea has their own uniform. Yes, you heard me.

However elementary schools in Korea don’t have uniforms, the students usually wear their own outfits of the day, unlike in Malaysia. In Korea, school uniforms come in the picture in middle school and high school.

While Korean kids are busy comparing each other’s uniforms and complaining about not liking the colour of their shirts, Malaysian students just have to stick with whatever they have.

Because in Malaysia, it doesn’t matter which school you’re from because the uniforms here are all the same! Your standard light blue pinafore or baju kurung for girls and navy green pants or shorts for the boys.

See?? Different uniforms for each school! In Malaysia, however..

I guess this is what makes Malaysia a little more special from the rest!

Also, Korea is a 4 seasons country. So, if you’re thinking what I’m thinking then yes. They have 4 different sets of uniforms for 4 for different seasons!

Next, the amount of time Malaysian and Korean students spend in school is different.

Most of the time for students in Malaysia, school starts at 7:30 a.m. and ends at 12 p.m. or 1:30 p.m.. Latest is 2:30 p.m. if you have extra classes. Since school ends around noon, Malaysian schools don’t provide lunch as the students usually go home or eat out.

Each class goes on for at least 30 minutes to an hour and there is only ONE break time which is recess. Students grab snacks at the cafeteria and just hang out around the school for 30 minutes before class starts again.

In Korea however, school starts at 8 a.m. and usually ends around 4:30 p.m.. Each class goes on for 50 minutes and there’s a 10 minutes break in between each class.

Unlike in Malaysia, they have lunch sessions since school finishes in the evening anyway. Lunch is for an hour before they go back to class.

In Korea, it’s normal for the students to stay back in school until 11 p.m. to study. They usually call their self study time 야자 (Ya-ja). However it’s rare here in Malaysia because schools close after 7 p.m. lol!

Also, it helps reduce the weight in the pupil’s backpack and can prevent back and shoulder injuries in the future! (Malaysia, take note)

There are even cubbies for their shoes too, how cute *cries*

They only change rooms only when needed eg : during Science where they use the lab or PE where they head for the gym or the field. This system is the same here in Malaysia too but sadly, the schools in Malaysia don’t have lockers for the students. At all.

FYI, growing up with High School Musical most Malaysian kids dreamed and I mean DREAMED of having their own lockers in high school because well, they’re cool and just really convenient. Haha they dreamed too soon :’)

So, these are the few of the many other differences between the schools here in Korea and Malaysia! Which of these facts did you already know?

Also, do you have the desire to be fluent in Korean, or at least have a vocabulary range equivalent to a high schooler in Korea? Fear not! For here at Penang Korean Class I provide onsite and livestream Korean classes!

Head over here to find out more!

Find out how you can learn a new language from home

PrevPrev2019 Top 10 Best Street Food in Myeongdong!
NextWays To Get Around Korea Easily!Next