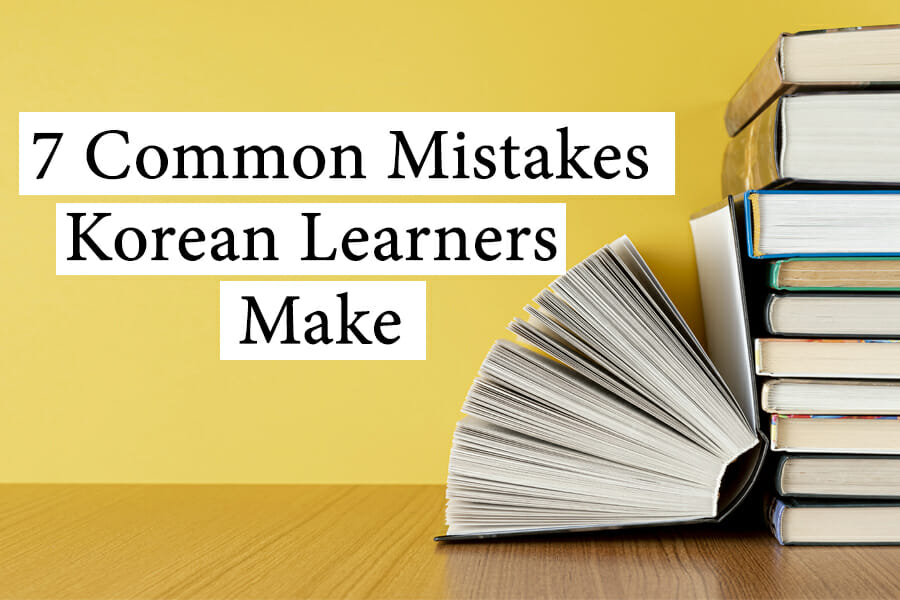 When learning a new language such as the Korean language,  mistakes are bound to happen. But don’t freak out, it is normal.

However, mistakes can also cause you to want to quit learning completely. Therefore, there are a few mistakes that are best to be avoided entirely from the beginning.

You will progress quickly if you are able to avoid this 7 common mistakes made while learning the Korean language.

If you are learning the Korean language, you have most probably learned the Hangul alphabets or at least you are in the process of learning it.

Learning the Hangul alphabets is the easiest part of the Korean language learning process.

Writing the Hangul alphabets are straightforward and easy. However, when it comes to speaking Korean sentences, it is not easy.

If you didn’t notice already, the same alphabet 있 can have two different sounds when it is used in a different context.

This happens a lot in the Korean language, therefore, it is advised to learn the Hangul characters and not just the Korean romanization.

Almost every language has its own expressions and the Korean language is no exception to this. Just like any other language, Korean expression or idioms doesn’t literally mean to what the direct translation says.

Often times, Korean learners try to break down the words and analyze them. In this case, it is not needed as this is a mere expression.

입이 짧다
Literal translation: Mouth is short
Actual meaning: used on someone who is very picky when it comes to food.

Most Korean language learners are used to the idea of learning from a book which can be a mistake if you are not are listening to the words enough.

As we discussed earlier, Hangul can change it sounds depending on how it is used in a sentence.

This means it will only bring you a lot of confusion if you are not listening as much as you are reading the words.

When you listen to a Korean sentence, you create the image of the Hangul characters in your mind, you read them, find the meaning of the words then only you understand it.

Hence, it is advised to listen more to the language rather than just reading words.

Besides listening, it is also important to practice speaking Korean. Learning to read the Hangul characters alone is not enough.

If you just learn Korean vocabulary to store those words in your mind and not use to communicate then it beat all the purpose of learning the language in the first place.

If you don’t have someone to speak the Korean language in real life, you can find other language learners or native speakers who are willing to take the time to talk over Skype or any other video-calling platforms.

Another common mistake Korean language learners make is watching K-drama or any other K-content with subtitles on.

You might think you are doing yourself a favor by watching Korean related content (which you are) but you are not going to learn much or as fast with the subtitles on.

If you want to improve your listening skills or just on your overall Korean language skills, you might have to turn off your subtitles.

When it comes to basic S.O.V Korean sentence structure, (Subject, followed by Object and Verb) most Korean learners do well in it.

These mistakes are more common when a sentence has multiple adjectives, adverbs or other details such as time and date. Using the right words in the wrong way is a common mistake made by Korean learners, which can lead to incomprehensible sentences.

Korean word order has a set of specific rules and these rules can be learned easily just like anything else from the Korean language. To solve this wrong word order, it is important to practice forming sentences as often as possible.

Every time you learn a new concept, practice by using it in a sentence and make sure to check that your sentence is correct with a Korean tutor or a native Korean speaker.

If you learn and practice the basic rules for using adjectives, adverbs, and other details, then you will have no problem using them together in a sentence.

Another common mistake Korean learners make is not having a Korean tutor or a native Korean speaker who can they can practice with or who can motivate them when are feeling lazy or discouraged.

If you can’t afford to hire a tutor to teach you, you can join a Korean community online whether it is on Facebook, Instagram or any other channel that communicates in Korean.

Besides, we also have a Facebook group where we share articles, quizzes, and thoughts on all things relating to the Korean language and culture. Feel free to join us!

Do you have any mistakes that you have made in the past that we did not write about? Feel free to comment below and also let us know how did you overcome those barriers!