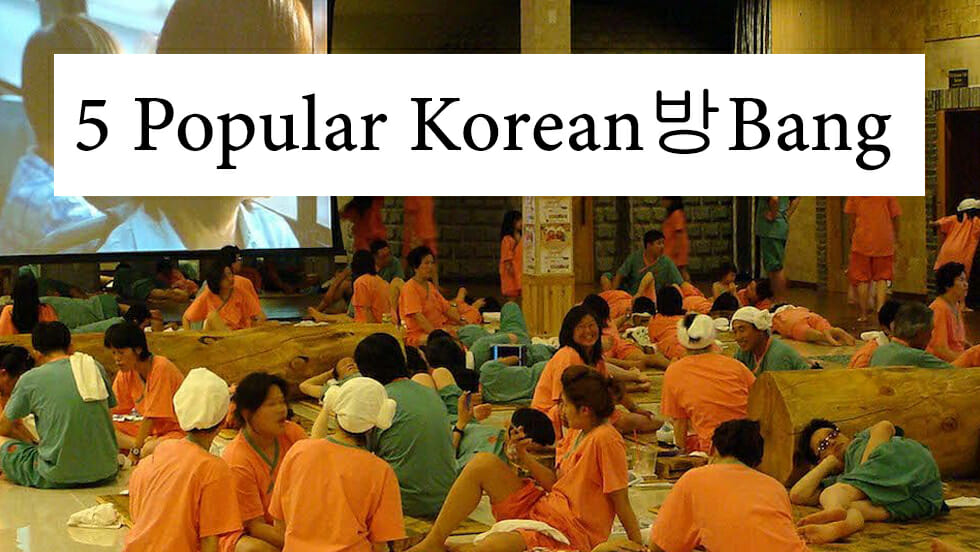 In the Korean language, “bang” “방” translates as a “room”.

In the Western world, “room” refers to a private space used by a restricted group of people. E.g., a living room, bedroom, dining room, bathroom or even a conference room at the office.

However, in South Korea, you can find a lot of “bang” rooms which are places for public entertainment.

How Did the Korean Bang Culture Came About?

The video-bang is the first prototype of the bang room culture in Korea. It was originally established as a cheaper alternative for moviegoers and rose to popularity among young people in Korea because of the privacy offered.

The video-bang was born in the early 1990s where small rooms were equipped with large screens, a sofa and videos of popular movies.

Furthermore, most college students in Korea did not have their own privacy as some of them live with their parents. Due to this, they do not invite their significant other over to their home as it is equivalent to a marriage proposal in the Korean culture.

Therefore, bangs became a cheap alternative for hotels and motels for young college lovers, with rental not more than 20,000 won for a movie’s duration.

Most bangs are also located around colleges and youth areas such as Sinchon and Hongdae.

Besides, over the years, the technological level of in-room entertainment has progressed. The first upgrade brought the DVD bangs followed by the multi-bang which have VOD movies, Nintendo Wii, karaoke machines and board games.

These bangs also provided mostly complimentary snacks and non-alcoholic drinks. A multi-bang in Hongdae even boasts a chocolate fondue fountain.

If you watch K-dramas, you have probably seen a Jjimjilbang 찜질방, which is a Korean-style sauna house.

Besides enjoying the sauna, spa, and massages, visitors can also relax with their families and friends while chatting, having drinks/snacks, watching TV or just sleeping on the floors.

Some bigger Jjimjilbang 찜질방 may also come with facilities such as a fitness gym and a karaoke room.

The Jjimjilbang 찜질방 is a favorite hangout place for Koreans to be in their free time with their families and friends.

If you happen to be a tourist who arrived early in the morning in Korea you can visit the Jjimjilbang 찜질방 to rest – since the hotels are not ready for check-in or no shops are open. It is open 24 hours a day.

Watch the video below to get a glimpse of the Jjimjilbang.

Another type of  Korean bang room you might have noticed in K-drama is the Noraebang 노래방. Noraebang 노래방 is a Korean-style karaoke room.

You might have seen how in some Korean dramas where bosses and staff who are done with their dinner usually head out to Noraebang to wind down after work.

It is also a favorite place for families, friends, and colleagues to hang out.

If you are not a Korean speaker, you can still enjoy yourself in the Noraebang as they offer songs in different languages such as English, Japanese, Chinese, Korean, etc.

One unique feature of the Noraebang 노래방 is that after you finish singing a song, the screen will show your score.

However, the score does not seem to have anything to do with your singing talent. If you want to score a very high mark,  you just need to keep screaming words into the microphone.

Watch the video below to get a glimpse of the Noraebang

PC Bang 방 is another type of popular Korean bang room. The PC Bang 방 is a Korean-style internet cafe that provides access to the internet and computers.

Instead of hanging out at cafes while sipping on some coffee or going to the movies, Koreans usually hang out in the PC Bang 방 to play computer games.

In some K-drama’s you may have seen kids getting caught by their parents or teachers while playing computer games instead of studying or going to school.

These kids visit the PC Bang 방 as some of them may have strict parents that do not allow them to play computer games at home.

The PC Bang 방 also offers food and drink and you can eat/drink it in the comfort of your own seat. If you wish, you can also be there the whole day to play computer games or just surfing the internet.

Since the PC Bang 방 offers food and drinks where you can eat/drink in your own seat, you can spend the whole day surfing the internet or playing the computer games in the PC Bang 방 if you wanted.

Another popular Korean bang is the DVD Bang 방. A DVD Bang 방 is a private room to watch movies.

You can pick any movie you want from the old school DVD’s and then watch them in the respective rooms that will be assigned to you.

Besides Korean movies, there are also a variety of movies from different countries for you to choose from.

Watching movies is one of the popular Korean leisure activities and it is also a favorite activity among Korean couples.

The reason being is that the DVD bang 방 offers more privacy than watching a movie in the cinema.

Another Korean bang room that is popular in South Korea is the Multibang 멀티방. Looking at the word “multi” you can tell that this room provides various activities to enjoy by just being in one place.

E.g., watching movies, karaoke, playing computer games, surfing the internet, etc. Like any other Korean bang room, the Multibang 멀티방 also offers snacks and drinks so that you can spend the whole day there if you wish too.

Click here to get a glimpse of the Multibang room

Have you been to any of the above Korean bang rooms in South Korea before?  If not, you should try to do so when you are in South Korea to experience the Korean “bang” culture.

Check out our previous article to find out why South Koreans are paying to live in a prison!