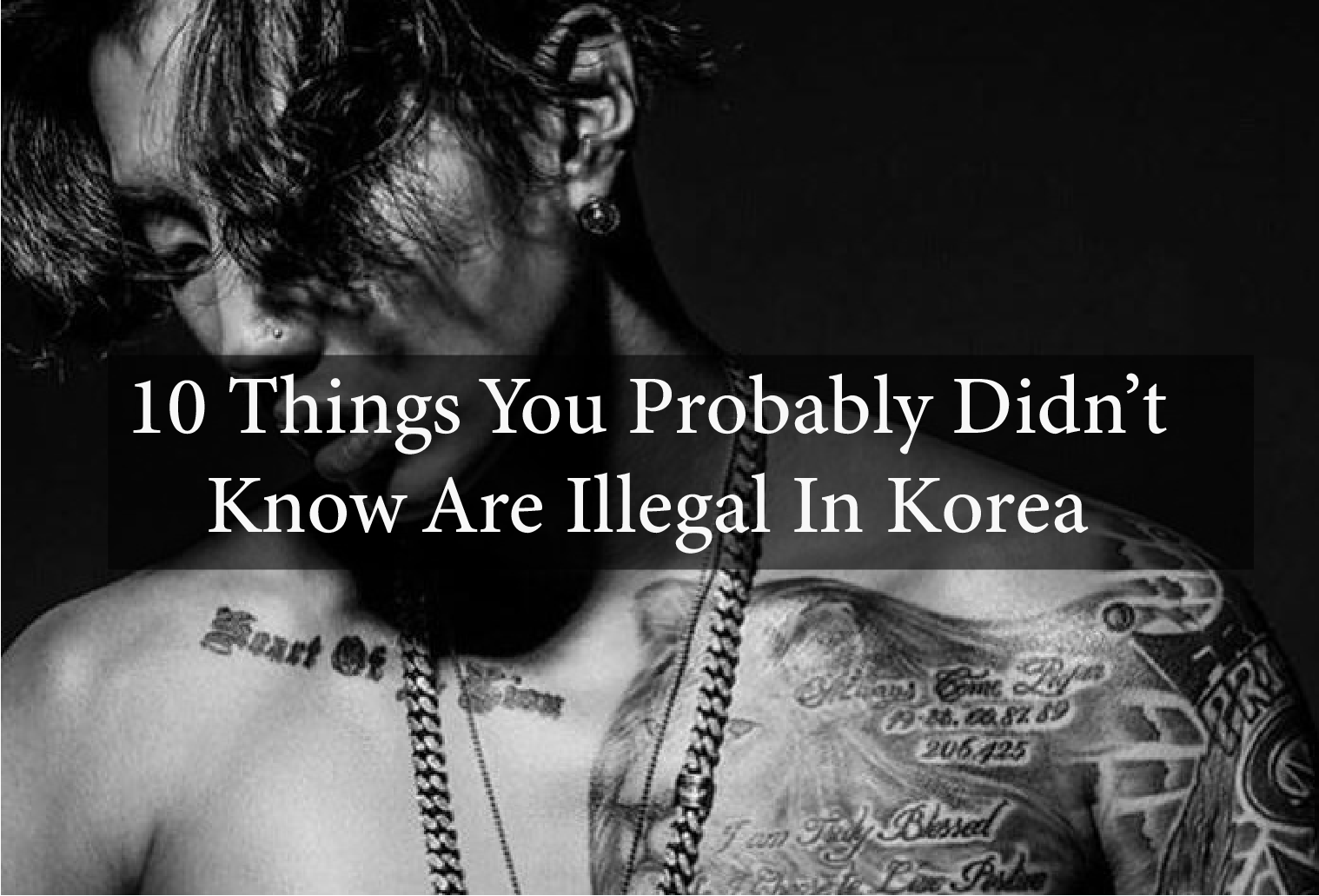 So, if you’re planning to visit or reside there, be sure to watch out for these 10 things you probably didn’t know are illegal in Korea!

문신 [moon-sin] Tattoos aren’t completely illegal in Korea, but you may be banned from entering some 찜질방 [jjim-jil-bang] public bathhouse. According to Korean law, tattoo artists are required to be licensed medical doctors, but many tattoo studios still operate in Korea due to the lack of enforcement.

도박 [do-bak] Gambling is basically illegal in Korea. Although there are several casinos built in the country, they are all catered to foreigners, except the one at Gangwon Land. Located out in the middle of nowhere, it’s the only 도박장 [do-bag-jang] casino where Korean citizens are allowed to gamble.

While 피우다 [pi-u-da] smoking is very common in Korea, it’s actually illegal to smoke in most public places such as the area around subway station exits, designated streets, shops and several tourist areas. Anyone caught smoking in restricted will be subject to a fine of 100,000 KRW (~$90 USD).

While not strictly legal, the use of dog meat for consumption lies in the grey area (a situation that’s unclear or open to interpretation). A South Korean municipal court had ruled that killing dogs for their meat was illegal, though this does not make it illegal to consume 개고기 [gae-go-gi] dog meat.

But activist groups, especially the younger generations have continued to push for a complete ban on the practice.

The production, consumption or distribution of pornography is illegal in Korea. Originally formed as a method to reduce sexual crimes, the law is still in full effect today. Although the censorship of pornography has become more lenient, many sites that are considered too lewd or offensive are still blocked.

Also known as the “Shutdown Law”, the government has forbidden children under the age of 16 in South Korea to play online video games from 12AM to 6AM. In an effort that had brought protests from development companies, it’s proven to be very effective as 게이머 [ge-i-meo] gamers in Korea must sign in with their government ID number.

It has been illegal to operate street stalls since 2011, but many 포장마차 [po-jang-ma-cha] street vendors are actually still operating illegally. Although not all street vendors are breaking the law, many carts set up on the street are unregulated and untaxed.

Government lobbying is illegal in Korea so that the 정부 [jeong-bu] government can freely operate the country. All the 정치가 [jeong-chi-ga] politicians are banned from receiving funds from corporations or outside the organisation, but companies have found ways around it by offering politicians jobs after leaving office. As such, any attempt of lobbying can be simply categorised as bribery.

After school programs have been around in Korea for a long time, supplementing and sometimes replacing regular schooling programs. Although this educational culture has allowed Korea to boast a high rate of 졸업식 [jor-eop-sik] graduation, it has caused many students to commit suicide.

To control over-studying, the Korean government has prohibited late night teaching by forcing after-school programs to end by 10pm.

While it’s legal in other countries, 마리화나 [Ma Ri-hwa-na] marijuana is illegal in Korea. The citizens will face legal repercussions if they are found to have smoked (including purchase, possess and transport) marijuana, not only within Korea, but also abroad. However, marijuana is legalised for medical purposes.

So, if you need to smoke when you’re in Korea but not sure whether you can smoke at the area, you can ask, “여기서 담배를 피워도 되나요?” [yeo-gi-seo dam-bae-leul pi-wo-do doe-na-yo] (Can I smoke here?)

What are illegal in your country? Let us know in the comments below!