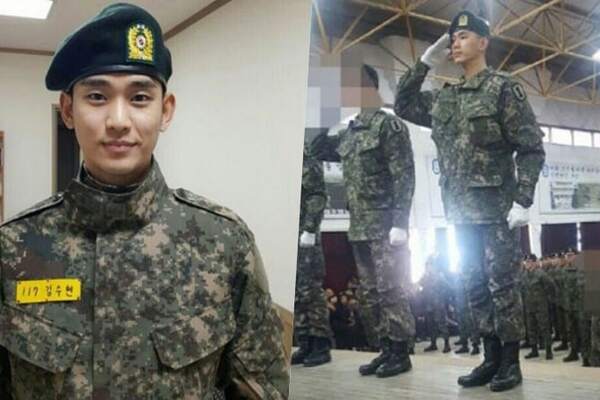 Kim Soo Hyun is back from military service!

Kim Soo Hyun, who is known to be one of the nation’s beloved actors has finally been discharged from military service on July 1st 2019!

Widely known as Do Min Joon from My Love From The Star, netizens were gathered outside Imjingak Peace Bell in Paju, welcoming and celebrating him “coming back home”.

As expected, fans are highly anticipating a new project from Kim Soo Hyun; which is understandable. Two whole years without this incredibly handsome and talented guy? Who wouldn’t want a great comeback!

Besides Kim Soo Hyun, there are other artists as well who were discharged from their military service earlier this year too!

Here’s a link to learn more about the military service in Korea : https://ubitto.com/blog/10-things-to-know-about-korean-military-service/

Fans not only from Korea but all around the world were jumping with joy at the announcement and on the day of release for their favourite Hallyu stars.

Lee Min Ho enlisted in the military on May 12th 2017 as a Public Service Officer and was discharged on April 25th 2019.

In conjunction to his release, the actor has already been reported to be working on a new project for a drama as the male lead (what more can you expect from this guy?)

He will be acting alongside actress Kim Go Eun (Ji Eun Tak from Goblin) who will be portraying the female lead.

Ji Chang Wook enlisted in the military on August 14th 2017 as part of the active-duty army. He was discharged on April 27th 2019, just a few days after our darling Lee Min Ho.

He has already discussed about a new drama that he will be acting in as the male lead, yet again. Time to rejoice after 2 years since Suspicious Partner!!! *cries*

Ji Chang Wook will be partnered with fellow actress Won Jin Ah who was also the main role Lee No Eul, from the K-Drama “Life” back in 2018.

The genius behind the songwriting from Akmu and the bold voice in your favourite songs such as Dinosaur, 200%, Re-Bye and Last Goodbye; ladies and gentlemen here is our one and only Lee Chan Hyuk from Akdong Musician!

This smol bean enlisted on 18th September 2017 at the Marine Corps and was later discharged on May 29th 2019.

Due to him joining the military, the duo Akdong Musician which consists of him and his sister; fellow musician Lee Su Hyun was on hiatus for 2 years. Su Hyun continued to promote as a soloist for the time being but now with her brother back, we are expecting a new comeback soon!

Aside from these celebrities who have been discharged, 2019 awaits even more of these K-Idols and K-Actors such as :

T.O.P joined the military on February 9th 2017 and is said to be discharged on July 8th. Wow, has 2 years gone by so fast already?

Well would you look at that, a fellow Big Bang member! Their very own leader infact!

G-Dragon enlisted on February 27th 2018 by entering the 3rd Infantry Division’s boot camp in Gangwon province. He is an active duty-soldier like Ji Chang Wook.

He is set to be discharged from military on October 26th 2019.

Actor Lee Hyun Woo left for his military service on February 19th 2018 and will be returning soon on October 19th 2019.

It is not confirmed if he will be working on new projects as he has yet to be discharged but we will be waiting and hoping for a spectacular fresh start!

With new and exciting projects coming soon, 2019 is definitely the year for anticipation and drop dead comebacks from these beloved artists after 2 years of hiatus!

Which actor’s or singer’s new project are you most excited for and why? Mine is definitely Ji Chang Wook’s. The plot for Melting Me Softly sounds so intriguing at the first read! *heart eyes to the MAX*

Here’s a link to the plot of Melting Me Softly : http://asianwiki.com/Melting_Me_Softly

Anyway, did you know that Penang Korean Class is going to have a Rocket Korean Workshop on the 27th – 28th of July 2019?

This unique program is to help learners who are often busy and are unable to meet the schedules of weekly classes.

With this workshop, you’ll be equipped with the fundamentals and ‘weapons’ for you to face a whole new Korean language journey.

Though fast-paced, this is NOT an intensive or ‘cramped’ workshop but rather a focused one that will allow you to pick up the essentials and start speaking right away.

If you are interested to know more details : instalment, etc, you can visit this page

Do share this info to your friends, family or anyone at all if they’re interested in learning the Korean language. The dates for this workshop is on a weekend, so be sure to book it on your calendar and we hope to see you there!