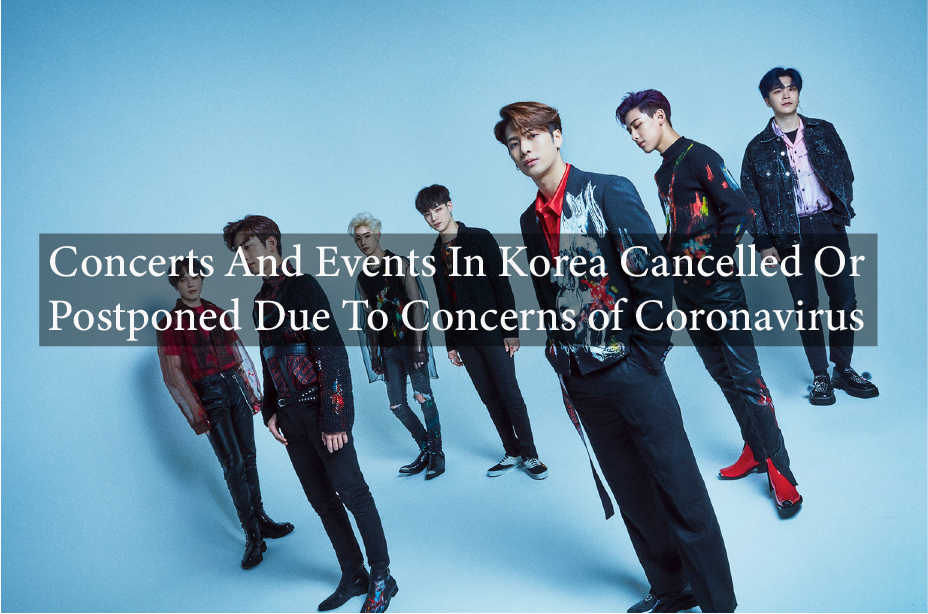 Concerns of the Coronavirus outbreak has taken a heavy toll on South Korea, especially in the entertainment industry.

Several upcoming K-Pop concerts and events have been cancelled or postponed, regardless of domestic or overseas schedules for the safety of members, fans and staff members.

Here’s a list of concerts and events that have been postponed or cancelled due to concerns of Coronavirus so far.

ASTRO has postponed their fan meeting, “The 4th ASTRO AROHA Festival [CAMPUS]”, which was scheduled to be held on March 7 at the Olympic Park Olympic Hall in Seoul.

Kim Woo Seok‘s fan meeting, which was supposed to be held on February 22 has been postponed due to the venue canceling all events this month. His agency, TOP Media will announce a new date and location in the future.

On January 31, Starship Entertainment announced that they will be postponing WJSN’s fansign event in Guangzhou, China, which was set to be held on March 1. They stated that the decision was made for the artists’ and fans’ health and safety, and that they will notify fans of new details at a later date.

MOMOLAND will be postponing their Japanese fan meeting, which was set to take place on March 19 and 21 in Tokyo and Osaka. Their agency, MLD Entertainment has stated that they will notify the new dates.

JYP Entertainment has announced that two stops on GOT7’s world tour “Keep Spinning” have been postponed due to the coronavirus.

NU’EST’s Ren will also be postponing his overseas event “Ren’s Life,” which was set to take place in Macau on February 23. SKN LIVE, the event organizer, made the announcement that details for the changed schedule will be shared at a later date.

SEVENTEEN’s world tour “Ode To You” that was scheduled to take place at Kuala Lumpur’s Axiata Arena on 22nd February has been cancelled.

The canceled shows that were scheduled for February and March also included the ones that was supposed to take place in Taipei, Madrid, Paris, London and Berlin.

Baek Ji Young’s nationwide tour, “BAEK STGE,” has also been provisionally postponed. The tour was scheduled to begin on February 15 in Gwangju and head to Jeonju on March 7 and Seoul on March 21.

The 56th Daejong Film Awards, originally to be held on February 25, has been postponed due to coronavirus concerns.

The event organizers said, “Because there is increased concern surrounding the novel coronavirus, we have decided to postpone the award ceremony for the safety of the spectators and artists.” The new date for the ceremony has yet to be revealed.

SBS has also announced that the “Running Man” fan meeting in Manila, originally scheduled for February 9, would be postponed to June 21.

Other than concerts and events, music shows also has been scheduled to be held without a live audience including “M Countdown”, “Music Bank”, “Music Core”, “Inkigayo” and “The Show”.