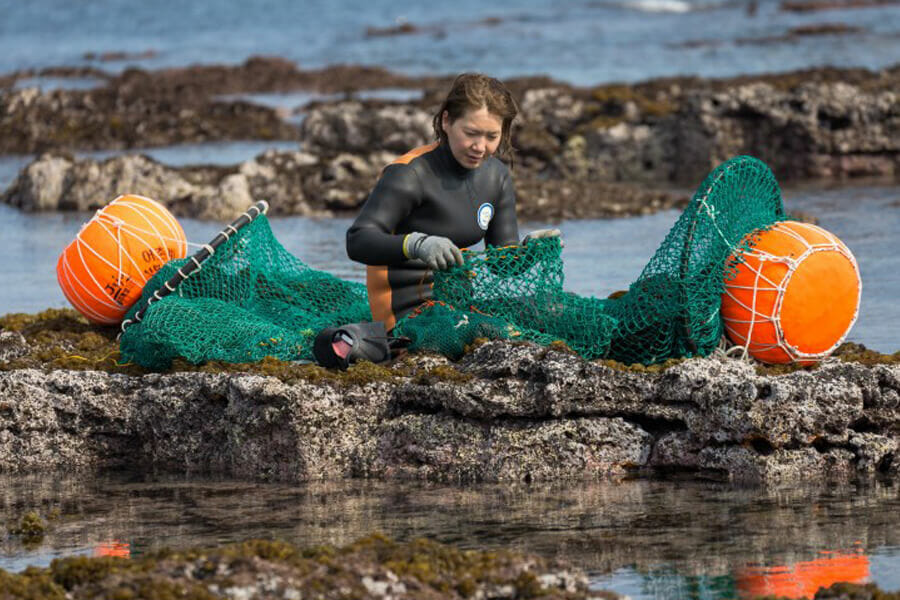 안녕하우꽈! 혼저옵서예! If you are wondering what I just said, I said hello and welcome in the Jeju dialect! Are you ready for a wild trip to Jeju Island to know more about the Korean sea woman?! Because I am!

해녀 Haenyeo divers are female divers from the province of 제주 Jeju in South Korea who catch seafood for a living only by using a knife.

These female divers are well-known for their free independent spirit, strong will and persistence.

These sea women dive 30 meters deep into the Korean Strait without the help of an oxygen tank and can hold their breath over 3 minutes!

Traditionally, girls began their 해녀 haenyeo training at the age of 8. They begin in shallow waters and work their way up to more challenging depths.

Only after 7 years of training, a girl is considered a “full-fledged” 해녀 haenyeo. The oldest 해녀 haenyeo alive today are over 80 years old and have been diving for 66 years in total! That is a really long time!

The tools of a  해녀 haenyeo consist of a wet suit, gloves, goggles, chest weights (to aid diving), an L-shaped weeding hoe, and net attached to a flotation device.

With the new wet suits, the 해녀 haenyeo divers can stay in the water for up to 5-6 hours, even during the wintertime.

However, it has not always been this way as before wet suits, all they wore were cotton swimsuits and they could only stay in the water for one hour. After an hour, they would get out and warm themselves up by the fire for 3-4 hours.

After their break, they jump back into the water for another hour. During summertime, however, they can stay in the water for 3 hours before taking a break.

There are three 해녀 Haenyeo levels to achieve by experience: sanggun, junggun and hagun.  해녀 Haenyeo women divers exist in South Korea ( 제주 Jeju only) and in Japan (Ama divers).

제주 Jeju’s diving culture can be traced back to 434 A.D. Initially, the diving was a profession only exclusive for the males, with the exception of those women who worked closely with their husbands.

The first time a female diver was even mentioned was in a 17th century literature. The monograph of 제주 Jeju geography describes them as “jamnyeo” which literally translates to “diving women.”

By the 18th century, the female divers, who were referred to as “haenyeo” exceeded the number of male divers. There are a few possible answers to this shift.

For example: in the 17th century, a huge number of men died in the sea due to accidents from deep-sea fishing and the war which means diving became a women’s job.

Another version is, physically women have more subcutaneous fat and higher shivering threshold than men, which makes them more capable of withstanding the cold seawater.

For whatever reason, sea diving became a female-dominated industry with many of them replacing their husbands are the main laborers.

Since so many families now rely on 해녀 haenyo divers for their main source of income, a semi-matriarchal society was formed on 제주 Jeju with the 해녀 haenyeo being the head of the household.

Sea diving is the sole source of income for the people of 마라 섬  Mara Island, a tiny island off the coast of 제주 Jeju.

The reversal of gender roles here was taken to an extreme level where women brought money to the family while men look after the children and go shopping.

However, during the colonial rule, the 해녀 haenyeo remained as peasants, never leveling up the chain to become small-business owners or managers of seafood manufacturing plants.

Even at home, most 해녀 haenyeo remained as the main caretaker and did half of the house chores.

But the good news is things have changed. The 해녀 haenyo divers are recognized as one of 제주 Jeju’s most valued jewels.

The Korean government shows its appreciation for the Haenyeo diver’s contribution to 제주도 Jeju’s island by subsidizing their gear and giving them exclusive rights to sell fresh seafood.

In March 2014, the Korean government requested UNESCO to add the 해녀 haenyeo divers to its Intangible Cultural Heritage list.

If you ever get to visit Jeju Island, don’t forget to see these strong  해녀 Haenyeo sea woman at work! Especially if you are a diver, it will be one of the most amazing experience to watch them in action underwater!

And if you wish to see the 해녀 Haenyeo women in real life, the best place to watch them would be Seongsan-ri, the village next to the Seongsan Ilchulbong crater.

Before you go here is a quiz to put your reading skills to test! Are you ready?

PrevPrev9 Sarcastic Korean Idioms You Have Probably Heard While Watching K-Dramas/K-Movies
Next4 Things Koreans Do to Celebrate 추석 Chuseok a.k.a the Mid-Autumn Festival!Next